In our megalomaniac plans for a cosplay (that were unfortunately never fully realized), there was a place for an Imperial Guardsman (well, for two of them, but this one is the theme of the today post

). We have decided that in the interest of diversity this one should be Tallarn one. Based on this picture mostly: 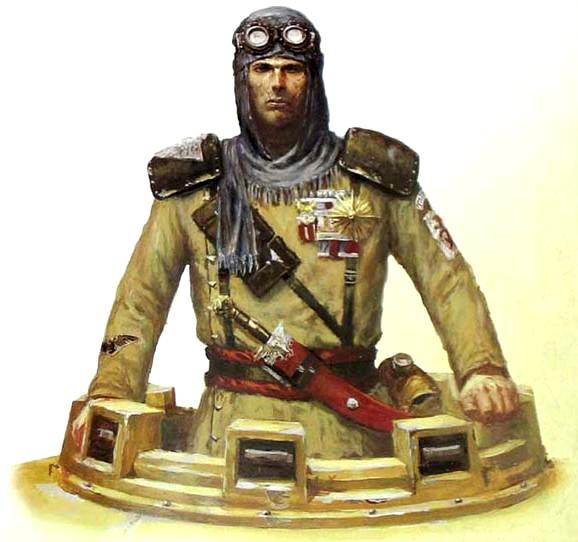 Picture did not have any weapons specified, other than ceremonial jambia type dagger (that I have also made), so I decided on something small and compact - in Warhammer 40k therms - autopistol.
Now, I did not want it to be standard Uzi-like autopistol, but have decided instead that something exotic, yet a bit crude should do a job.
So, some time later, after spending few weeks googling most obscure prototype weapons so I would find something appropriate and I have found this, Soviet 1960s ??-46 prototype self-defense weapon for the vehicle crew:

So, as usually first steps were to make a rough shape of it. As you can see, it is nothing really complicated - some plasticard, plastic vitamine tube, some wood for a front grip, perfume stopper and that was it:

Over that went a cover of the plasticard, thin brass sheet and decorations:

It was painted in a black finish, with heavy wear and rub marks on the edges and places where it would be held:

Tape wrapped grip/magazine, fire selector 1-3-0 markings, name (Nomine Imperator - all Warhammer 40k weapons should have a name in my opinion

) and a basic sling finished work:

And the pic of it "in action" with unfortunately only partially finished guardsman:

Simple enough project, it took only about 20 hours of the active work to do it.

Next for a guardsman was a signature knife - it is totally fake since most of it was made as one solid block of plasticard into which handle (perfume bottle wrapped with cord) was inserted into. Decorations were made of brass and copper sheet and sculpted skull. Old button with interesting pattern finished design:

One of inquisitorial pendants on the arm and a medal (that I don't have pictures off since it fell apart during con) finished design.

Uniform is cosplayer's own airsoft uniform, and he also has appropriate shemagh.

One day there is gonna be an overhaul of the guardsman cosplay for sure, but I have no idea when that day is gonna be....

To add a comment to the blog, you have to first join the site or login as a user

bojan ,
I will post in details about all those topics at a blog, but the short version: Plasticard is sheet polystyrene, I use 0.8-1, 2, 5 and 8-10mm thick. It comes in various density, hard one is easy to bend, glue together, make basic structure etc, softer one is great as it is easy to cut small details. It gives you nice smooth surface w/o spending ages to send wood/mdf/or other materials. It is easy to cut (once you learn a trick or two), easy to paint (good matte spray paint sticks to it well), holds paint well, can be glued by super glue etc. Disadvantage is that complex shapes, bent in two axis are very complicated to do. I buy it in local shops in Belgrade. If you are in the Belgrade and need address drop me a message, I will send you an address. If you live outside Serbia it is your lucky day - practically every model shop will have it, usually in all various thickness and textures. Glue - super glue (a lot) and hot glue. Finding same "junk" - every major prop is unique, so I do not run that much in the problem of finding same materials. And if I can not - oh well :( "As a team" is a bit of exaggeration - it is mostly me and Maki making things, other people helping occasionally.

Do store clerks get suspicious if you but a lot of glue at once?

MrsWee ,
I love to craft so I would like to ask couple of questions: Would you like to make a blog about materials you are using and where you get them? What is plasticard? What types of glues do you use? Would you please make a blog about using junk in creating props and what do you do when you want to make something again and can't find same junk? How do you function in a team? I can only craft by myself and I want to kill anyone who tries to help for "helping me wrong" :D

MumboJumbo ,
What really is impressive it the fact that you are making a lot of junk look good!

FuriosAna ,
So, this is a whole explanation for "skinny airsoft dude" :D Looks unfinished, you can da much more fabulous costumes!

BloodyBunny ,
That is a strange looking vitamin bottle :D It would be cool if it was a vitamin dispenser or something :D

Jazzy ,
We need to make those goggles...

Goggles can be found on ebay, medals will be much more dificult...